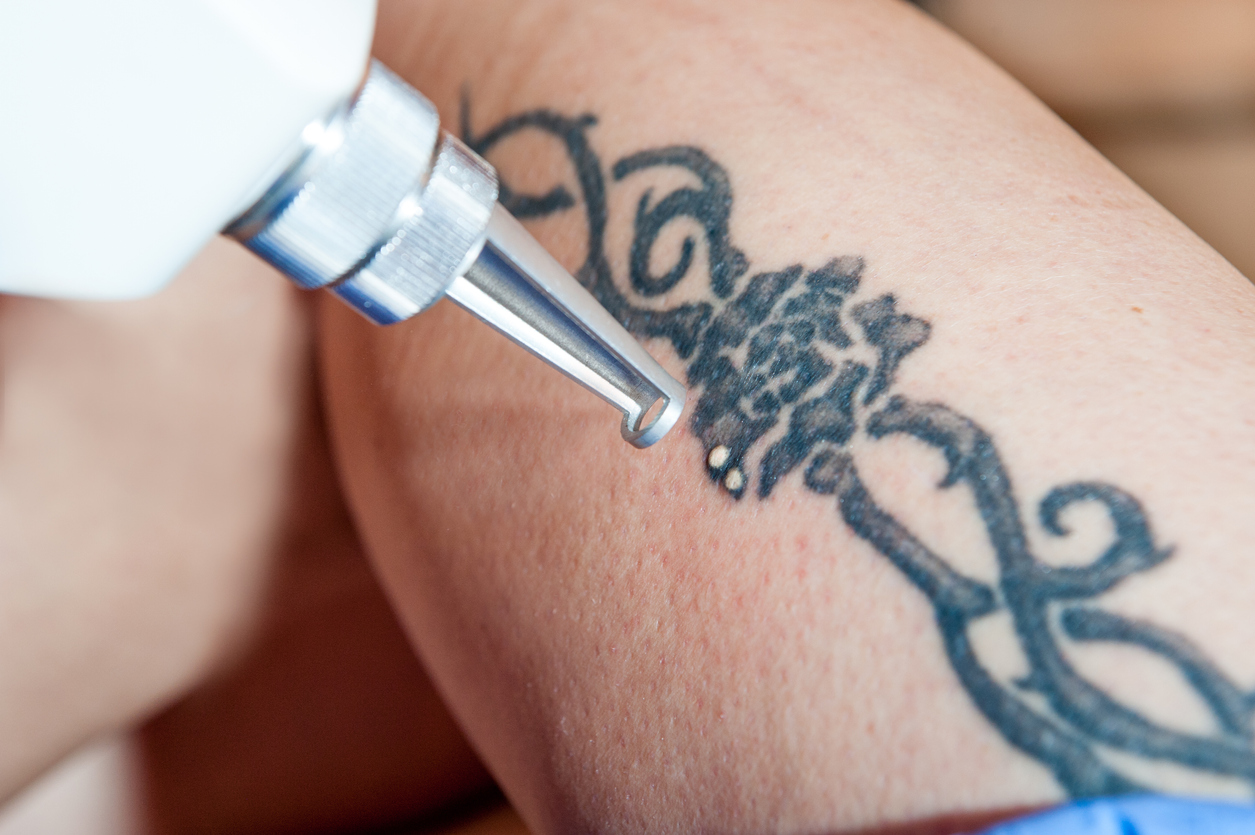 Tattoos are cool…until they aren’t. They say something important about our personalities, relationships, and beliefs…until they don’t. For many people, tattoos are badges of honor; for many others, they’re badges of regret. In many societies, tattoos are frowned upon, or at least seen as tokens of youthful foolishness and excessive frivolity. A young person’s folly in such societies may become an adult’s embarrassment. Cosmetic tattoos are growing in popularity more frequently than decorative ones. But these, too, can outstay their welcome. Eyebrow tattoos, for instance, may fade over time, or may become awkwardly apparent after a day in the sun lightens eyebrows just a bit. Add it all up, and tattoo removal is fast becoming just as popular as tattoos themselves. This guide spells out the most effective approaches for removing tattoos.

Why Do People Consider Removing Their Tattoos?

Many tattoos don’t age well. The problem, really, is that they don’t age at all: while we grow and change as people, our tattoos remain frozen in time. The classic example is the name of a partner or spouse: when the relationship turns sour, the tattoo turns from a celebration of love to an outright mockery. Religious figures and gang symbols may stand for allegiances that change with time. Even nonrepresentative body art can lose the emotional connotations that made it special when it was first wrought.

How Do Lasers Remove Tattoos?

The most common and proven procedure for removing tattoos is laser treatment. Picosecond lasers, otherwise used to address pigmentation issues, are the machines of choice for doctors lucky enough to have access to them. Picosecond lasers deliver intense bursts of energy roughly every picosecond (a trillionth of a second). Tuned to the proper frequency, this energy is focused on the exact area of the skin where tattoo ink resides, and is absorbed by ink molecules, which then burst. Fragments of the ink molecules are then safely disposed of by the body’s natural functions. The first lasers to gain widespread acceptance for their tattoo-removal ability were Q-switched lasers. These functioned much like picosecond lasers, and were tuned to the same frequencies depending on the color of ink to be removed. But Q-switching delivers longer-lasting pulses of laser energy whose peak power falls far short of that generated by picosecond lasers.

Q-switched lasers are still common, but have lost their place as the state of the art. A well-built and -maintained Q-switched laser machine can still do the job, but more slowly than picosecond lasers, meaning more sessions at the clinic and more passes of the laser.

Performed by a properly trained and experienced practitioner, laser tattoo removal is very safe. Again, picosecond lasers have an advantage over Q-switched and other lasers: because they sustain peak power for such brief moments, picosecond lasers incur far less risk of damaging the tissue surrounding tattoo ink by virtue of sustained exposure. This also lessens the downtime associated with laser tattoo removal.

Where Is Laser Tattoo Removal Available in Singapore?

In Singapore, as in many other jurisdictions, laser skin therapy may only be performed by properly trained, certified physicians. Any search for laser tattoo-removal services should start and end with proper medical facilities, not with salons or day spas. It’s unwise to let just anyone with a needle in his hand apply a tattoo, and just as unwise to let an untrained hand attempt to remove one.

Because tattoo removal may not be the primary service offered by even the most qualified doctors, patients should do a bit of research before pursuing the idea. The ideal tattoo-removal doctor would have experience with the procedure, access to a picosecond laser, and plenty of good reviews, both on the internet and by word of mouth.

How Long Does It Take to Completely Remove a Tattoo?

Tattoos are almost never removed with just one laser-therapy session. The size of a tattoo, and the density and saturation of its ink, are primarily responsible for determining the number of sessions required to remove it.

A tattoo’s colors also play a role. Multicolored tattoos can take longer than monochrome ones: colors exist because they absorb light of different frequencies, and since lasers remove tattoo ink by overwhelming the ink with absorbed light, different frequencies of laser work best for different colors. A given doctor may not have access to lasers of every frequency needed to ideally treat a given tattoo. 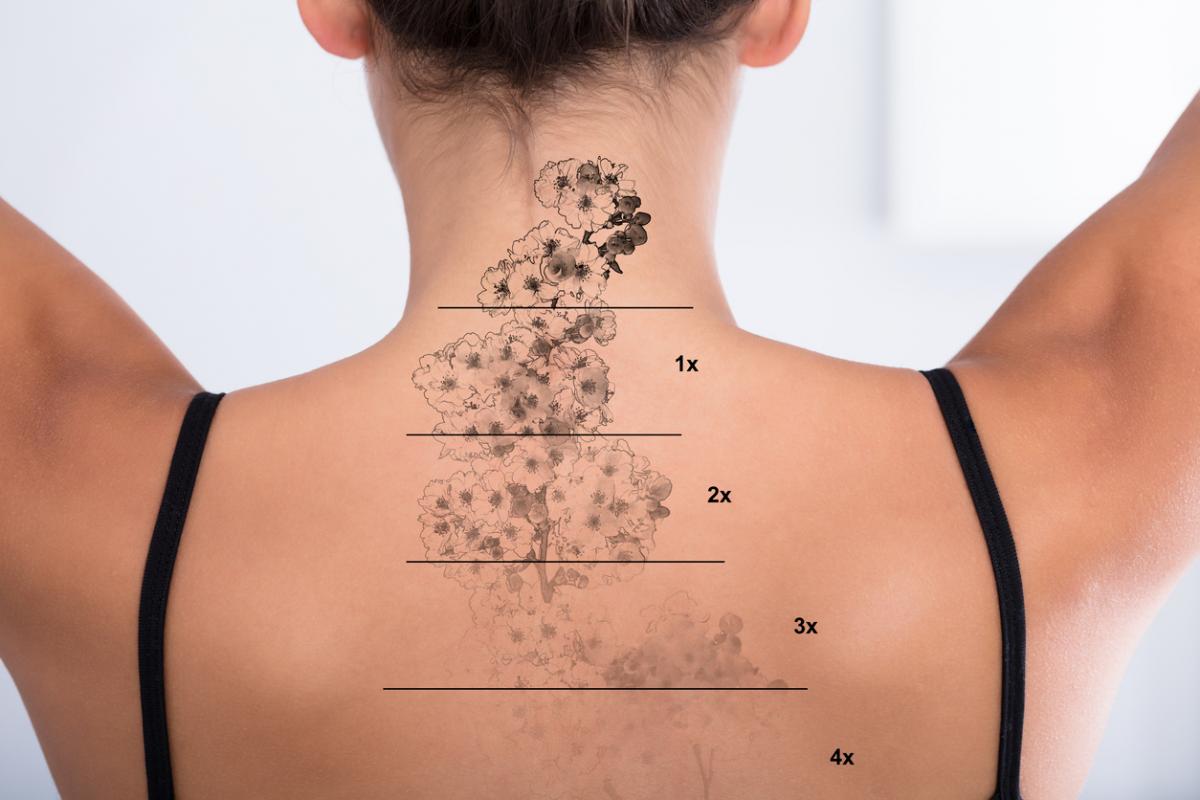 Other factors affecting the number of sessions necessary to achieve full results include skin tone and skin type. Lighter skin creates a greater contrast with most tattoo ink, and absorbs less laser energy; lasers are therefore a bit more effective on lighter skin tones, which may reduce the number of sessions required. Patients with sensitive skin may not be able to withstand full treatment sessions, making for more sessions overall.

A tattoo’s location also affects the time needed to remove it. Tattoos on locations that receive more blood tend to be easier to remove than those on the forearms or ankles, where fewer of the body’s resources are able to cart away blasted ink molecules.

How Close Can Lasers Come to Entirely Removing a Tattoo?

Picosecond lasers can remove 90% of typical tattoos in the space of six sessions. Earlier-generation lasers, or lasers used by less-than-capable operators, may take many more sessions, perhaps even twice as many.

When a tattoo has been all but entirely removed, it becomes more difficult for lasers to target ink molecules, and results may begin to plateau.

How is Laser Tattoo Removal Performed?

As with any surgical procedure, one of the most important steps occurs before the surgery itself. A full consultation will allow the doctor to examine the patient’s tattoos and recommend the best plan of attack. This also gives patients a chance to ask any questions that might spring to mind, and to get a sense of exactly what to expect from the process.

Laser tattoo removal is roughly as painful as getting a tattoo in the first place. Most sessions last 10 to 15 minutes, though a full session for a large tattoo may take half an hour. Because lighter colors like red and yellow absorb light less readily, their presence may add to the time needed for each session.

Mild to moderate redness nearly always accompanies laser tattoo removal, and some scabbing may occur. Patients are typically asked not to place undue stress on the treated area, nor expose it to sunlight, for five to seven days following each session. The longer a given part of the skin is exposed to laser energy, whether because an older laser was used or because a tattoo contained light colors, the greater the chances that scabs will form.

Unfortunately, the skin must heal completely from the tattooing process itself before laser tattoo removal can even be considered. Because tattooing breaks the skin and deposits ink below the epidermis, the skin may still be healing even when the tattoo itself is ready to emerge from its initial bandaging. Most doctors advise at least a month’s recovery time before a new tattoo can be removed.

How Much Does Laser Tattoo Removal Cost?

Tattoo removal costs much, much more than tattoos themselves. Picosecond laser tattoo removal typically costs $750 to $1,500 per session. Earlier-generation lasers may cost less per session, but the additional number of sessions required to achieve full results usually more than offsets the difference. The procedure is rarely covered by insurance.

Tattoos are trendy in much of the world these days. Anyone considering a tattoo, though, should know that trends fade much faster than ink.