Singapore Doctor Explains How To Get Rid of Double Chin 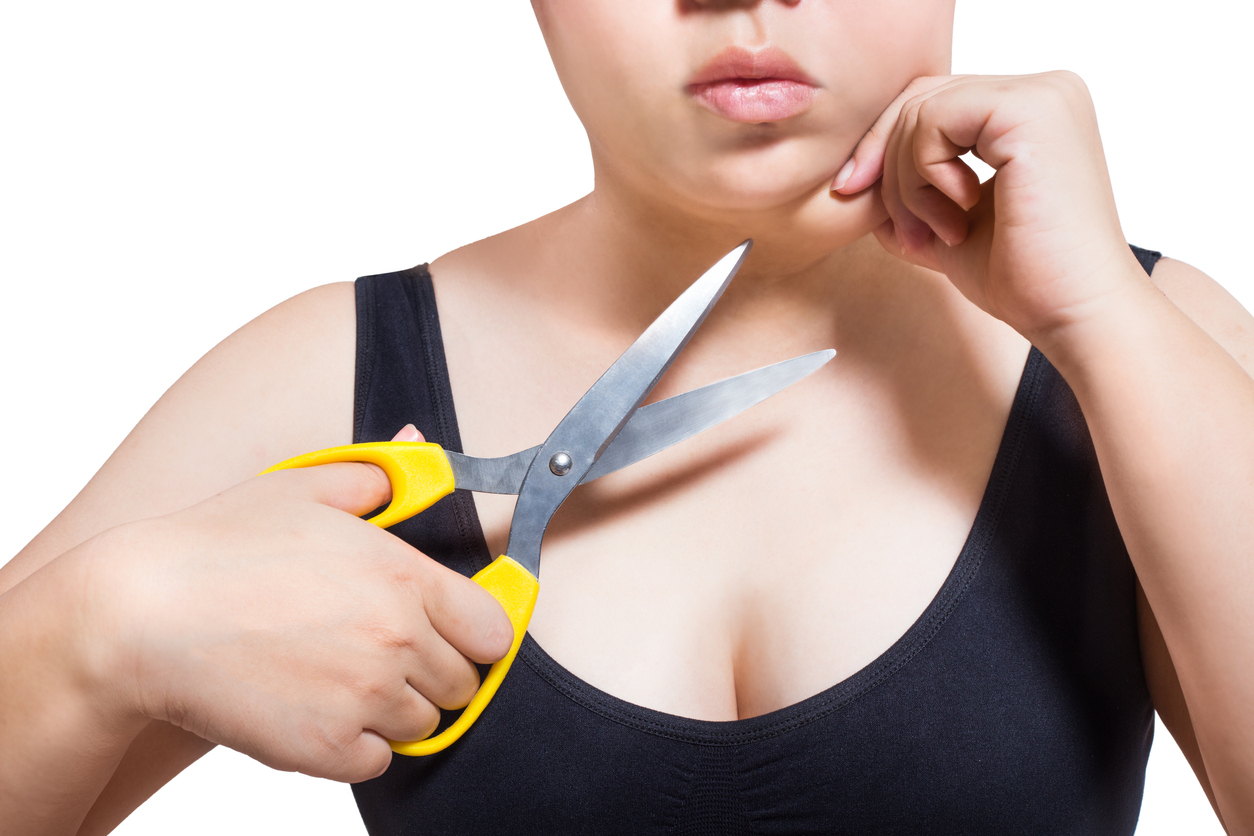 A double chin can ruin an otherwise attractive profile. Regardless of its causes, a double chin can make even a fit person look fat and sluggish, and a strong face look weak.

Fortunately, several methods are available that are proven to reduce or eliminate double chins. These range from improved diet and exercise regimens to a wide range of surgical and non-surgical methods. We’ll take a look at the most popular options, but first a bit of an overview.

If “double chin” sounds a bit graceless, consider its common medical name: submental fat. Any way you refer to it, the condition arises from one of three main causes: the growth of fatty tissue under the skin due to weight gain, the loosening of skin beneath the chin due to age, or genetic factors.

Weight gain is the most common culprit. Fatty tissues accumulate under the chin later than they do in other parts of the body, so most cases of double chin indicate that it’s time to do something about those extra pounds. 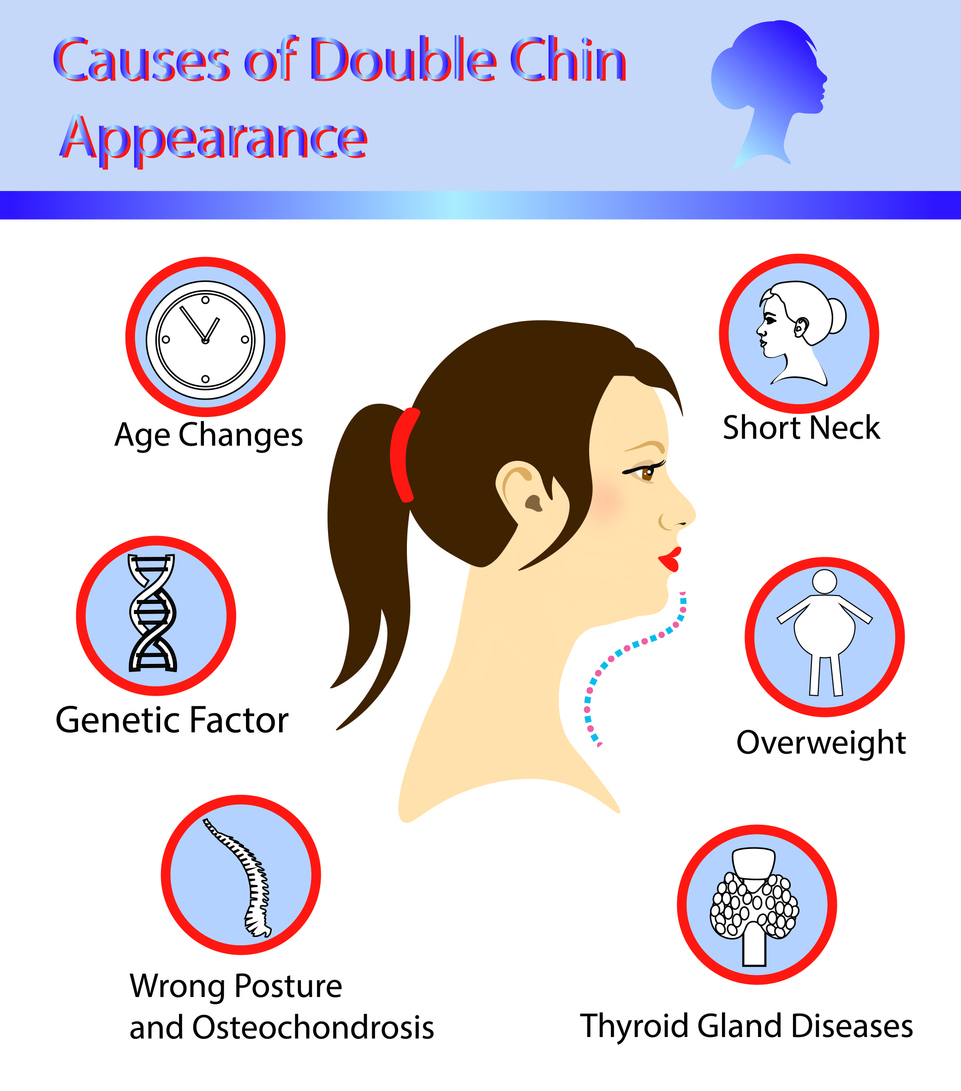 As we age, our skin naturally loses collagen, the protein that is largely responsible for giving skin its shape. As a result, our skin grows looser; this effect is particularly noticeable under the chin. Some people develop a narrow fold of loose skin, commonly referred to as a waddle. Others develop a double chin.

Some people, though fit and not yet of middle age, still develop double chins. These cases are likely down to genetics, and are usually resistant to weight loss.

How to Lose a Double Chin

Since most cases of double chin are due to excessive weight, most patients will see the greatest benefits simply from improving their diets and getting more exercise. This of course conveys significant side benefits: being overweight significantly increases a person’s risk of heart disease, cancer, and stroke, and of less-serious conditions like sleep apnea and joint problems.

As many of us know all too well, though, there’s no such thing as targeted weight loss. While specific muscles can be built and toned, fat-burning exercise draws on the body’s entire reserve of fat. In most people, a fatty double chin is a warning sign that their weight has become detrimental to their health, and a healthy weight loss program is a great response. But it may take some time before a weight loss program results in the reduction of a double chin: the body may choose to draw slowly on the chin’s stored fat, and more rapidly from other deposits.

When diet and exercise don’t do the trick, several more targeted approaches, both surgical and non-surgical, can help get rid of a stubborn double chin.

Surgery represents the most direct and often the longest-lasting treatment for double chins. As with any surgery, there’s a tradeoff: not all patients are suitable candidates for aesthetic surgery, and invasive surgery involves a bit more risk and recovery time than gentler approaches.

Any successful surgery begins with a full consultation with a qualified doctor. This is a chance for the surgeon to evaluate the patient, assess any risk factors, and advise on the best course of treatment. It’s also a chance for patients to ask any and all questions they may have about each possible procedure. Informed, curious patients tend to be the best patients, and any surgery’s chances of success are improved by a frank preliminary discussion between doctor and patient.

The primary surgical solutions for double chins are liposuction and neck lift surgery.

Submental liposuction involves the direct removal of fatty tissue from the chin and neck. Some clinics may refer to the procedure as neck contouring, especially when it is used to remove small deposits of fat. It is effective for a wide variety of patients, but not for those who are significantly overweight: the abrupt removal of large quantities of fat is not healthy, and doctors may suggest that severely overweight patients look to their diet and exercise habits before considering liposuction.

The procedure is typically performed under general anaesthesia. Once the patient is under, the surgeon inserts one or more small tubes into an easily concealed part of the face, usually behind the ears. This reduces the impact of any scarring that might result, though many patients report no visible scarring at all from the procedure.

The tubes are then moved under the skin to the exact spot being treated. When the tubes are positioned directly amid the fatty tissue to be removed, a gentle vacuum is applied, and the fat is pulled into the tube and out into a receptacle.

The procedure itself may be painless, but it constitutes a significant disruption to the skin: patients typically experience some swelling and bruising immediately following surgery, though these effects are short-lived. Patients must also wear a chin strap in the weeks following surgery: this keeps the skin’s layers, which had grown accustomed to a significant amount of neighboring fat, in place while they grow more firmly together. Full recovery typically takes two to three weeks.

Even after full recovery, patients may notice that the treated areas are saggy or wrinkled. Chin liposuction removes excess fatty deposits below the skin’s surface, but it leaves the same amount of surface area, which is now unsupported by the underlying volume over which it had grown. Neck lift surgery is the standard follow-up procedure in these cases.

Like chin liposuction, neck lift surgery is the specific application of a proven surgical method used on many other parts of the body. This is the preferred approach for people whose double chins are not due to moderate weight gain or a genetic disposition to store fat beneath the chin. It is also a popular follow-up procedure for patients who have had chin liposuction. 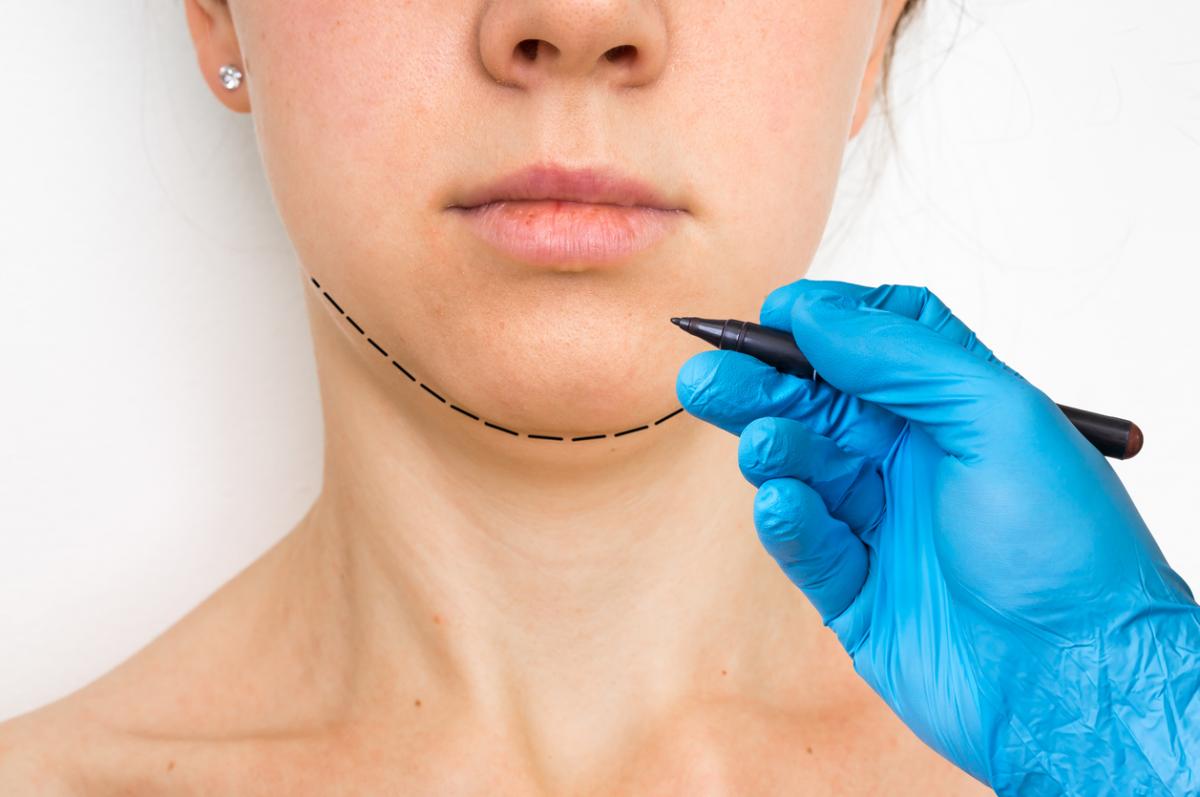 Platysmaplasty addresses a weakening of the platysma, a broad, thin muscle running from the collarbone to the jaw and chin. Over time, this muscle can lose its elasticity, resulting in sagging jowls or a double chin. Platysmaplasty tightens the platysma either by gathering excess tissue to the center of the muscle and suturing it into place, or by removing a small strip of the muscle and suturing the remainder. The procedure restores the platysma’s ability to define the neck and jawline.

After the platysma has been tightened, surgeons often perform a cervicoplasty, or removal of excess skin. This brings the skin in line with the platysma’s new contours, and allows for the best overall results following recovery.

Thread lifts place small sutures under the skin which, when tightened, pull the skin into a desired shape. Many suture materials used for threadlifting include elements that stimulate the production of collagen, which extends the procedure’s useful lifespan.

Before surgery, the treated area is cleaned and a topical numbing cream applied. The surgeon then maps the target locations for each thread, and a local anesthetic is injected at the insertion points. A needle creates entry points for the threads, which are then inserted and anchored to the points marked earlier.

Once the threads are securely anchored and any excess suture material is removed, the patient may return to normal activities. The procedure normally takes half an hour or so, incurs no downtime, and requires no special aftercare. Results typically last for 18 months to two years, at which point the suture material is naturally absorbed into the body.

Thread lifts specifically geared toward reducing double chins typically cost $3,000 to $6,000, depending on the number of threads required.

Fat freezing destroys fat cells by freezing them, which bursts their cell walls. The body then absorbs the remaining material.

Unlikely as it may seem, fat freezing can be directed specifically at the appropriate layer of the skin: only fatty tissue is affected, leaving the remaining tissue unharmed. The procedure requires no anaesthetic—while the fatty layer is being frozen, the skin’s outer layers, including its nerve endings, are naturally numbed—and each session typically lasts 15 to 20 minutes.

Because fat freezing merely destroys fat cells, leaving the body to dispose of them, some bruising and swelling is normal, and full results can take more than a month. Most doctors recommend two or three sessions of cryolipolysis to achieve full results on double chins; each session typically costs around $1,000.

Mesotherapy refers to the direct injection of chemical agents beneath the skin, usually accompanied by vitamins or other compounds that support the body’s healing processes. To reduce double chins, doctors usually use a fat-dissolving agent called sodium deoxycholate, branded as Kybella. 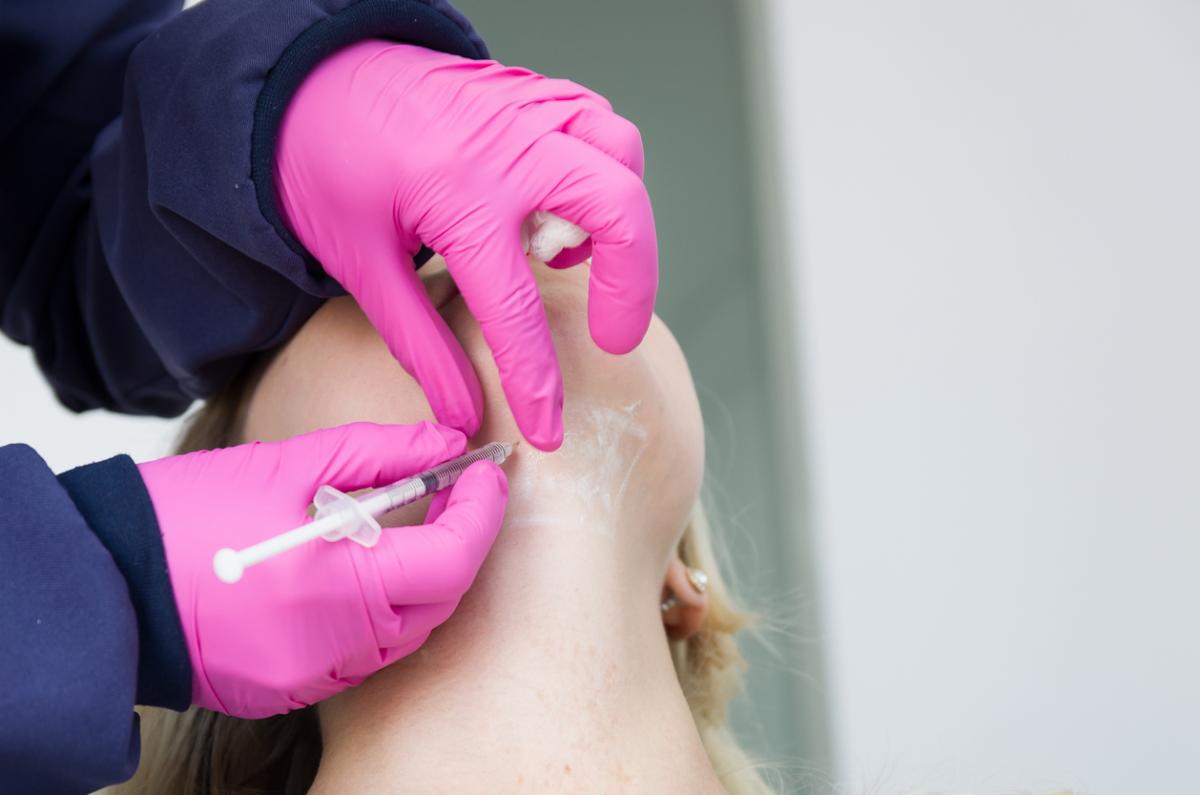 Like fat freezing, Kybella attacks the walls of fat cells, destroying them and leaving them to be disposed of by the body’s natural processes. It also stimulates the production of new collagen, which helps tighten skin.

After the chin is numbed with a topical cream, Kybella is injected into the areas to be treated, and the procedure is complete. Mesotherapy tends to work slowly, and it can be two weeks before significant results appear. At this point, the doctor may suggest an additional session. As with cryolilysis, some swelling and bruising is common immediately after mesotherapy.

The procedure is popular in some jurisdictions, but is not universally endorsed by national health authorities.

Like many procedures developed for general face treatment, HIFU can be applied to double chins. Because it represents a gentler approach than the other methods listed here, HIFU is often used as a secondary treatment after a more aggressive therapy has removed most of the unwanted tissue.

The procedure begins by numbing the treated area. A beam of ultrasound waves is then directed at the double chin. These waves are carefully tuned to a frequency that passes safely beneath the skin’s surface, disrupting only the cells forming the skin’s fatty layer. HIFU sessions typically last around half an hour, though times can vary greatly.

While HIFU does not produce dramatic results, its highly focused nature can make it a valuable follow-up treatment after other reductions to a patient’s double chin. The cost of treatment varies widely, but usually falls between $500 and $1,200.